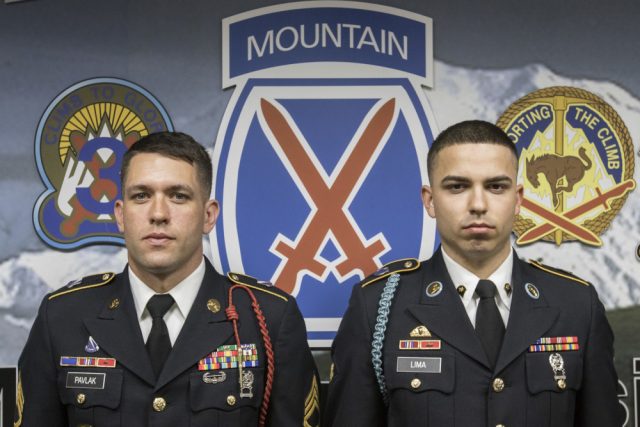 FORT DRUM, NY — Leaders with the 10th Mountain Division (LI) have announced
the Noncommissioned Officer and Soldier of the Year after a competition held
May 7-10 at Fort Drum.

Competitors also participated in a warrior tasks and drills lane, where they
established radio communications in order to call in a medevac. They then
loaded a medical dummy that mimics the weight of a human body onto a litter
and moved the simulated casualty to a notional helicopter landing zone.

A board served as the culminating event for the competition. Upon
completion, board members announced the winners.

“I wanted to be able to represent my troop and my squadron, and I was able
to do that. I just wanted to make everybody proud,” Lima said. “I am pretty
excited and thankful to everybody that has helped me to get this far.”

Lima said that he will go on to compete for the XVIII Airborne Corps Soldier
of the Year title. He will spend the coming weeks at Light Fighters School
preparing for the competition.

Pavlak explained that he will not be able to represent the 10th Mountain
Division in the XVIII Airborne Corps NCO of the Year competition because he
has orders for Recruiting and Retention School.

“I’m happy I won. It’s a good feeling to leave knowing that I came in
first,” Pavlak said.

Standing in his place to represent the division for the next level of the
competition will be Staff Sgt. Ifegwu Ifegwu, who serves in 1-89 Cavalry
alongside Pavlak.

“The first-place and second-place finishers were from 1-89 CAV. We were
separated by one point,” Pavlak said. “NCO-wise, I think our performance
shows the kind of excellence that 1-89 (Cavalry) tries to build up.”

Although Pavlak has to pass the torch, he assures that the 10th Mountain
Division will be well-represented by Ifegwu.

“He’s stellar, so he is going to crush it,” Pavlak said. “There is no doubt
in my mind about that.”