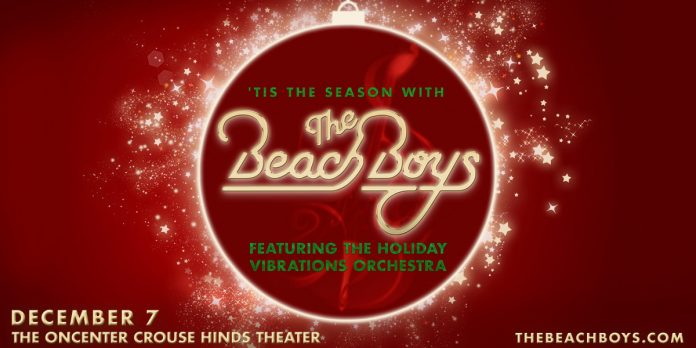 LOS ANGELES, CA – The Grammy Award-winning and Rock & Roll Hall of Fame band The Beach Boys today announced that they will bring their iconic Southern Californian sound to several cities across the east coast and Midwest this winter for their 2022 holiday tour, Tis the Season with The Beach Boys featuring The Holiday Vibrations Orchestra.  Kicking off November 26th at the Premier Theater at Foxwoods Resort Casino in Mashantucket, CT, the tour will make 15 more stops including a date at the iconic Carnegie Hall in New York, NY on December 5th before wrapping at The Chicago Theatre in Chicago, IL on December 18th.   Tickets go on sale to the public on Friday, October 7th at 10am local time. For ticket information, please visit thebeachboys.com and mikelove.com .

The 2022 holiday tour will feature a mix of holiday classics from The Beach Boys’ 1964 Christmas album as well as songs from The Beach Boys co-founder and lead singer Mike Love’s holiday album, Reason for the Season.  Featuring an array of new holiday songs and Christmas classics ranging from bright guitar and horn-filled pop and rock and track to softer traditional carols and ballads, Reason for the Season was produced by Sam Hollander (One Direction, Panic! at the Disco, Train) and Steve Greenberg (Hanson, AJR) and features artists including Hanson as well as Love’s children Ambha, Brian, Christian and Hayleigh Love.

The tour announcement comes on the heels of the opening of the Morrison Hotel Gallery’s Good Vibrations exhibit honoring The Beach Boys and their first decade.  The exhibit — which opened on September 28th at the Sunset Marquis Hotel in Los Angeles – not only celebrates The Beach Boys’ enduring and iconic legacy, but it also shines a light on some brilliant photographers who shot the group early on, capturing the Beach Boys superstar essence. The collection will showcase 30 never-previously-released images as well as a very limited co-signed edition of only ten prints, which have been signed by Mike Love, Al Jardine, Brian Wilson and Bruce Johnston. For additional details, visit the gallery’s official site.

The Beach Boys also recently announced Sail On Sailor – 1972, a new expansive multi-disc and digital box set releasing November 18th via Capitol Records/Ume. Produced by Mark Linett and Alan Boyd — the team behind 2013’s GRAMMY® Award-winning SMiLE Sessions and last year’s acclaimed Feel Flows – The Sunflower and Surf’s Up Sessions 1969-1971 — the box set documents and dives deep into their transformative and fruitful 1972 era. The comprehensive 6CD Super Deluxe Edition features newly remastered versions of Carl and the Passions – “So Tough” and Holland, plus Holland’s Mount Vernon and Fairway (A Fairytale) EP (complete with its original instructions to “please listen in the dark”), and
boasts an unreleased live concert recorded at NYC’s famed Carnegie Hall on Thanksgiving, 1972, the first-ever release of a complete Beach Boys concert from this era with the original setlist. The set also includes a bounty of unreleased outtakes, live recordings, radio promos, alternate versions, alternate mixes, isolated backing tracks and a cappella versions, culled from the historic album sessions. In all, it contains 105 tracks, 80 of which are previously unreleased.

Upcoming, The Beach Boys will embark on the second voyage of The Beach Boys Good Vibrations Cruise, presented by Club Kokomo Spirits, sailing March 3-8, 2023 from Miami, FL to Harvest Caye, Belize and Costa Maya, Mexico aboard the Norwegian Pearl. The second sailing of The Beach Boys Good Vibrations Cruise will feature live music on the open seas from sunup to sundown, across several stages and settings throughout the ship, including two unique shows from The Beach Boys and performances by a spectacular lineup of special guests to be announced soon. In addition, the specially curated schedule of events offers a variety of music-centered activities and once-in-a-lifetime opportunities for cruisers to interact with some of their favorite artists. Beyond the onboard experience,
cruisers will have the chance to explore and enjoy the serene beach on the private island of Harvest Caye, Belize and the local culture and crystal blue waters in Costa Maya, Mexico. Tickets are available at www.thebeachboyscruise.com.