WATERTOWN, NY  – The City of Watertown will be hosting a Public Meeting to discuss ideas for improving connections between the downtown area and the City’s riverfront parks – Whitewater Park and Veteran’s Memorial Riverwalk.

The meeting will be held 6 p.m. Wednesday, July 11, at the Empsall Building at 122 Court Street. This workshop will introduce the Downtown-Riverfront Parks Connection Feasibility Study, describe the planning efforts underway, and provide the public with the opportunity to suggest potential improvements they would like to see. 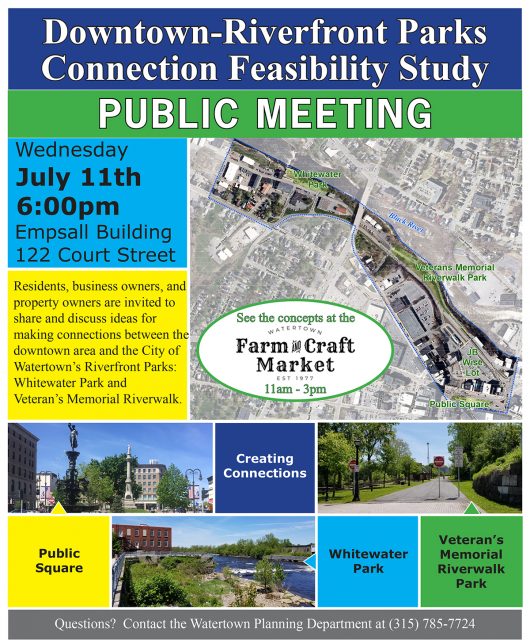 The meeting will be an opportunity to review and comment on preliminary ideas for connecting downtown to the parks, and the parks to one another. Topics of discussion are likely to include, but not be limited to: enhanced park entrances, pedestrian and bicycle amenities, sidewalk improvements, wayfinding, lighting, and safety.

This meeting is an early step in an ongoing planning process for the City of Watertown. Staff members from the City and a consulting team will be on hand to help guide the discussion. All local residents are encouraged to attend and provide input!

Planning consultants will also have a table at the Farm and Craft Market on Wednesday, July 11from 11am to 3pm and be available to discuss the project.

A second public meeting will be held later in the year to present and review the designs for connections, once they have been developed. This work is being conducted as part of a feasibility study funded by a Strategic Planning and Feasibility Studies grant from the New York State Department of State.