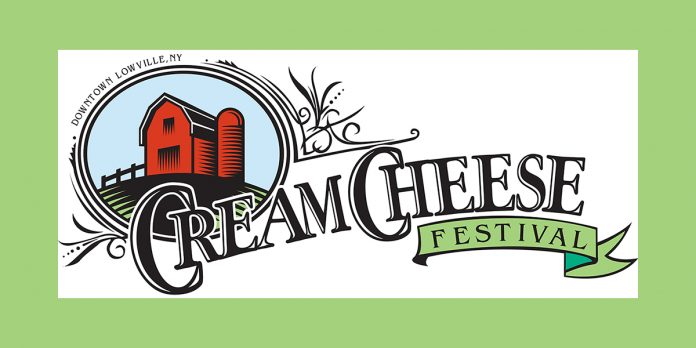 LOWVILLE, NY — Organizers of the annual Cream Cheese Festival in Downtown Lowville have announced this year’s event will return in a modified format Saturday, Sept. 18. Last year’s event was canceled due to the Coronavirus (COVID-19) pandemic and limitations put in place by New York State regarding hosting large events.

Festival chairman Jeremiah S. Papineau said the decision last year was a difficult one but the committee is cautiously optimistic about returning to hosting the free admission event.

“We were saddened to cancel last year’s Cream Cheese Festival but it was understandable, given the circumstances,” Mr. Papineau said. “After all, we were facing a pandemic unlike any challenge we’d ever seen. While we’re still in this pandemic, we’ve seen many events hosted on much larger scales. And, because many people in our community have made it known how much they’re looking forward to the return of the Cream Cheese Festival, we’ve examined how to do that with the utmost safety.”

“That’s extremely important to us as we are all volunteers organizing this event and want to make sure we’re doing our best to host it for the community but be as responsible as possible,” he added.

The Cream Cheese Festival is well-known for attracting thousands of people who come to patronize vendors, enjoy entertainment and games, and line up for a free slice of cheesecake provided by the Kraft Heinz facility in Lowville. The ability to attract a crowd is a double-edged sword, said Mr. Papineau.

“In any normal year, we’re excited to have people of our community turn out in great numbers and introduce many people from out of the area to what Lewis County has to offer,” said Mr. Papineau. “However, this year, we understood we have to be mindful of how large events can be potentially harmful to the progress we’ve made during the course of this pandemic.”

With that in mind and after collaboration with Kraft Heinz, modifications have been put in place for this year’s event. Most notably, Kraft Heinz will not create its usual giant cheesecake, which consists of approximately 3,500 pieces distributed for free to festival-goers. However, instead, Mr. Papineau said Kraft Heinz devised a solution for offering free cheesecake in a more convenient and pandemic-friendly way.

“We were excited when Kraft Heinz shared the news they would provide this alternative instead of scrapping the giant cheesecake altogether this year because of all the potential concerns we’ve seen with the pandemic,” said Mr. Papineau. “It’s a new product they’ve launched that sounds fantastic.”

The single-serve cups will have cheesecake flavored cream cheese on one side and a topping in a separate compartment. The three flavors of topping – strawberry, cherry or caramel – will be a bonus as the traditional giant cheesecake has been served plain.

Jena Coulter, plant manager for the Kraft Heinz facility in Lowville, said Kraft Heinz is “excited to participate” in the Cream Cheese Festival alongside their friends and neighbors in the community.

“While we unfortunately won’t be attempting to break our previous 2013 Guinness World Record for the largest cheesecake this year due to the pandemic, we look forward to serving festival-goers our delicious Philadelphia Cheesecake single-serve cups during the event,” she said.

Among other modifications to the festival, this year, the Children’s Discovery Park hosted at Veterans Memorial Park on Parkway Drive will have slightly fewer attractions and be more spread out. The attractions offered will also be ones with less concerns about close interaction among children.

“The key demographic for the Children’s Discovery Park is also the same demographic that’s not eligible to get a vaccine against COVID-19,” said Mr. Papineau. “So, we have to be very mindful of how we host this portion of the festival. We want to keep contact limited as much as possible and will have hand sanitizing stations and other safety protocols in place. We want to offer these fun activities but, again, we have to keep safety at the forefront of our planning.”
In addition to this year’s modifications, the usual contests hosted by the festival committee will not be held. The usual cream cheese mural is also under review as to whether or not it will be offered. Both are out of consideration to limiting close contact during the pandemic.

This year’s event will return to Downtown Lowville – on North State Street from Waters Terrace to the main intersection at Dayan Street and Shady Avenue and all of Parkway Drive – from 11 a.m. to 6 p.m.

Lowville native Beth Hall, co-host of 7News This Morning on WWNY-TV-7 and FOX 28, will again serve as emcee for this year’s event, kicking off festivities from the Main Stage on North State Street. Musical entertainment for that stage, coordinated by Jasyn Griffin, will again begin this year starting at 11 a.m. Opening ceremonies at the Main Stage will officially kick things off at 12 p.m. Musical entertainment will also be offered at the Veterans Stage next to American Legion Post 162 on Parkway Drive.

In addition, this year’s festival will again feature a recipe contest. Those wishing to participate may pick up six free packages of Philadelphia Cream Cheese at the Lowville Kraft Heinz facility, 7388 Utica Blvd., Wednesday, Sept. 15, and Thursday, Sept. 16, from 12 to 4 p.m. both days. Those picking up cream cheese from the local Kraft Heinz facility must furnish a copy of their recipe upon pick-up and will be subject to a temperature screening before being admitted into the building. Other arrangements may be made by calling 315-376-6575.

Entries must be delivered to the recipe contest booth located inside the Lowville Fire Hall between 8 and 9 a.m. Saturday, Sept. 18. Parking is available in the Lowville Free Library lot during drop-off hours, with access to the fire hall available via the rear entry doorway on Parkway Drive.

Displays are limited to a 2 ft. by 2 ft. area on the table and only the registration number should be visible on an entry. Electrical outlets will be available.
In addition, all entries must be prepared with Philadelphia Cream Cheese and any recipe submitted becomes the property of Kraft Heinz.

Entries must be picked up by 2 p.m. the day of the contest. Kraft Heinz is not responsible for any dish not picked up that day.

Those wishing to register for the recipe contest must send an email to the Cream Cheese Festival Committee in advance to creamcheesefestival@gmail.com or call 315-748-6361.

ABOUT THE CREAM CHEESE FESTIVAL
The Cream Cheese Festival has attracted much attention since its inception in 2005. The popular travel website TripAdvisor listed the Cream Cheese Festival as one of the top 10 wackiest summer festivals in 2011 and 2012. It has also received similar designation from The Weather Channel. The event has brought much attention to Lewis County and brought many people to the region, helping the local economy if even one day a year. In 2013, Lowville was recognized as home of the World’s Largest Cheesecake by Guinness World Records. That year, the festival welcomed a representative from Guinness World Records who certified the cheesecake made by the plant on Utica Boulevard was indeed the world’s largest. The massive creation weighed in at 6,900 pounds — more than 2,000 pounds heavier than the prior mark of 4,703 set in 2009 by a Kraft Foods plant in the country of Mexico.