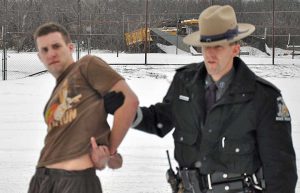 WATERTOWN, N.Y.  — A man was arrested Wednesday morning on allegations he entered five vehicles, including a marked state police patrol SUV and van, parked at the Ramada Inn, 6300 Arsenal St., and stole nearly $20,000 in items, according to state police.

He was arraigned at 3:30 p.m. before town of Watertown Justice James P. McClusky who sent him to the Metro-Jefferson Public Safety Building with bail set at $25,000 cash.

Police allege that at 2 a.m. Wednesday he broke a window on a state police 2006 Ford Econoline van and stole a laptop computer, Verizon air card, radar unit, portable police radio, bullet proof vest, defibrillator, gloves and assorted police paperwork and thumb drives. The sum total of property taken was approximately $7,640. He caused $1,350 in damage to a window and a license scanner, they said. 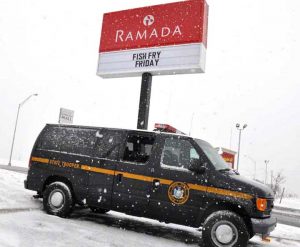 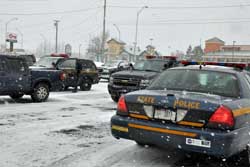 He is also accused of breaking a passenger side window on a police Chevy Tahoe and stole a laptop computer and wireless card valued at $1,900, police said. Damage to the window and wires inside the cabin was listed at $600.

The state police vehicles were part of a commercial vehicle unit from Troop C Sidney that had conducted a detail Tuesday at the Interstate 81 southbound rest area in the town of Watertown.

In addition, he is accused of stealing a GPS device, camo backpack, military clothing and road safety kit from a 2006 Chevrolet belonging to David W. Smith with a total value of $550.

In another vehicle, a 2004 Jeep Wrangle owned by Robert C. Smith, Mr. Donchevich is accused of stealing $125 in items including gloves, a Maine E-Z pass, and cell phone charger.

According to court documents, he caused $250 in damage to a center console in another car and stole 10 to 15 compact discs and pair of gloves with an estimated value of $100, police said.

All of the stolen items were recovered, police said.

Troopers also accused him of stealing a credit card from his mother, Julia T. Donchevich, Watertown, and used the card at four separate locations on Tuesday night, his birthday, making $247.47 in charges.

He also allegedly used his mother’s 2003 Oldsmobile without her permission, they said.

Justice McClusky ordered his mother an order of protection from her son.

Numerous times throughout the arraignment, McClusky had to remind Mr. Donchevich that there was an audio recording taking place and advise him to not make any unnecessary comments or admissions.

At one point he said, “I learned my lesson the hard way”.

“There goes my life down the crapper,” he added. “So much for the Army.”

The Watertown Police Department assisted troopers in the investigation. 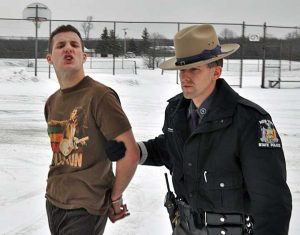