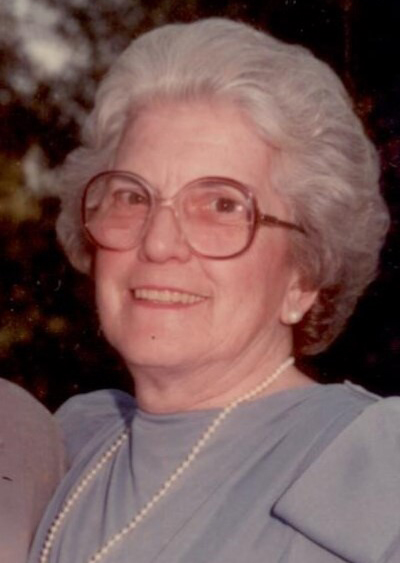 Mary was a teller for Marine Midland Bank. She was a cashier then supervisor for the Elementary Lunch Program for the Watertown City School District, retiring after 28 years to the district.

She attended both St. Anthony’s and St. Patrick’s Churches, was a member of the Altar Rosary Society, a former member of Catholic Daughters of America, and was a past district deputy for the Columbiettes. During World War II Mary was a Red Cross nurses’s aide.

Mary volunteered in the gift shop of Mercy of NNY for over 40 years. She managed it for 34 years until Mercy closed in 2013. She was the Volunteer of the Year in 1995 and was instrumental in establishing the Auxiliary of Mercy Scholarship at JCC for nursing students.

Mary also was the Volunteer of the Year for the Office of the Aging. She was a past president and held several other offices along with being a member of the Board of Directors of the local AARP, and a past president and district director of the PTA, receiving an award for her service to the board in 1979.

Along with her enjoyment of volunteering, Mary enjoyed reading and knitting.

She is survived by her daughter and her husband, Ann and William Barker, and several nieces, nephews, and one cousin. She was predeceased by parents, her father dying when she was nine years old, her two brothers, Robert and Frederick LaPlante, two sisters, Bertha Greene and LaNora Sayers, and a nephew and his wife, Richard and Helen Greene.
Calling hours will be 4 to 7 p.m. Tuesday, June 22, at Cummings Funeral Service, Inc., Watertown. A prayer service will be held 9:15 a.m. Wednesday, June 23, at the funeral home followed by the funeral Mass celebrated at 10 a.m. at St. Patrick’s Church. Burial will be in Glenwood Cemetery.
Donations in her name may be made to Holy Family Church, 129 Winthrop St., St. Patrick’s Church, 123 S. Massey St., or Sisters of the Precious Blood, 400 Pratt St., all in Watertown, NY 13601.
Online condolences to Mary’s family may be posted at www.cummingsfuneral.com.
Mary’s family would like to thank her neighbors, past and present, for their care and concern for her, especially Mary Jean, Gillian, and Sharon. They would also like to express their thankfulness to her health care team, including Dr. Rhode, Joe, Monika, and Eileen.