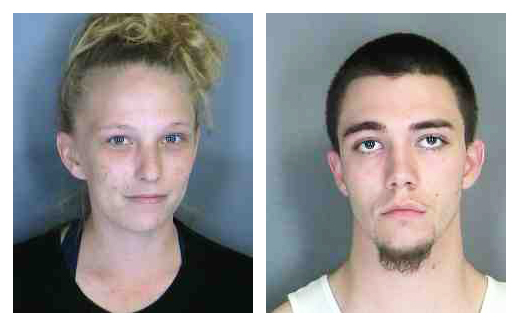 WATERTOWN, NY — On 05/30/18, at about 11:45 am, members of the Metro-Jeff Drug Task Force executed a search warrant at 139 E. Main St. in the City of Watertown.  This is the residence of Crystal A. Pierce and has been the focus of an on-going drug investigation.

At the conclusion of the search warrant a small quantity of heroin, 5 packets of spice (synthetic drugs), a digital scale, supplies and cutting agents used to package drugs for sale, and $6,085.00 in US currency were seized.

As a result, Crystal A. Pierce (age 27) was charged with one count of Endangering the Welfare of a Child and one count of Criminally using Drug Paraphernalia in the 2nd degree.

Drew M. Schroy (age 22) was charged with Criminal Possession of a Controlled Substance in the 3rd degree.

Ms. Pierce and Mr. Schroy were arraigned in the City of Watertown Court by the Honorable Judge Renzi.

Ms. Pierce was held on $1,000.00 cash bail and Mr. Schroy was held without bail due to his past criminal history.