“We’ve been welcomed into the Sackets, Henderson and Chaumont area,” Deputy John M. Gleason, a sheriff’s deputy since 2005, said. “We’ve been getting lots of thanks from the boaters we’ve encountered.”

“Even the occasional ones we have a problem with, I don’t think we’ve gotten too much grief over,” he added.

The 30-foot boat, purchased by the sheriff’s department in 2005, was funded through a $100,000 federal Law Enforcement Terrorism Prevention Program grant.

The boat was locally built by American Metalcraft Marine, Inc., in Clayton. 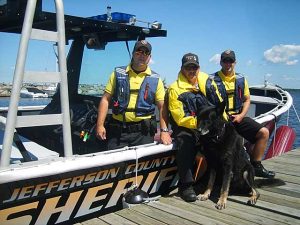 “It was built right here in Clayton,” Deputy John M. Gleason said. “As far as maintaining the boat, lots of the work is done right where the boat was manufactured.”

The vessel is docked at Madison Barracks Marina in Sackets Harbor during the summer months.

Some insist that every boat must have a name. In this case, the sheriff’s boat was named in honor of one of its own.

Written near the boat’s radar system, above the deck, are the words, “Deputy Sheriff Michael J. Finerson.”

Deputy Finerson, a 24-year-old member of the Jefferson County Sheriff’s Department, was killed after being shot in the town of Watertown at the scene of a Weaver Road domestic fight. 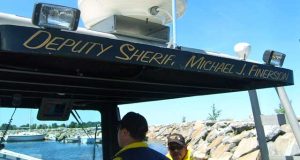 The sheriff’s department even has help from other species to work toward its focus. 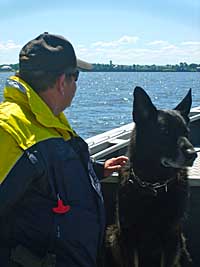 Bullet, an 8-year-old, black German shepherd trained to find narcotics and explosive materials, is part of the sheriff department’s K-9 unit and often joins deputies on the lake patrols.

Deputy Trudeau said Bullet often works as hard as the human beings aboard the boat.

“A couple years ago we went out and searched a boat and he found a couple grams of cocaine,” he said.

The sheriff’s department acquired Bullet, a native of St. Catherines, Ontario, in 2004 at the tune of $7,500, which was covered by an Edward Byrne Memorial Grant for $30,000 from the state’s Division of Criminal Justice Services.

What is the boat’s top speed?

“It will go fast enough to get what we need to be done,” Deputy Gleason said jokingly.

“We can’t let all our secrets out.”

Throughout the summer months, the boat patrols all areas within the Jefferson County boundaries of Lake Ontario.

“Sheriff Burns has done an excellent job as far as building up our ability to respond to different types of emergencies,” Deputy Gleason said. “It would be nice to see the recreation program built up more.”

As some county residents allegedly complain about the increase in patrols on the lake, deputies said the sheriff’s department’s main concern is the public safety.

“We’re out here to enforce the laws, but we’re out here to make the waterways of Jefferson County safer for your everyday boater,” Deputy Gleason said. “Any questions, just contact the sheriff’s department and we’ll come right out.” 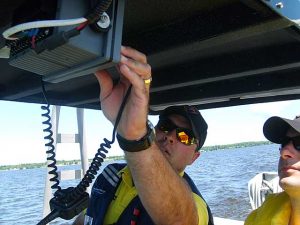