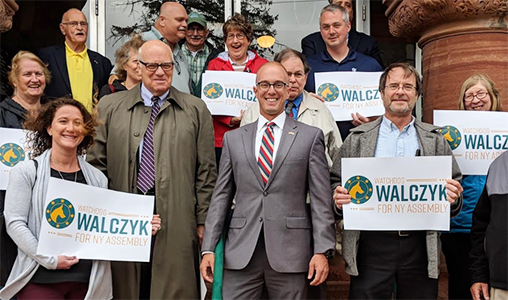 WATERTOWN, NY — Watertown City Councilman Mark Walczyk stood with supporters and friends on Thursday on the steps of the St. Lawrence County Court House (Canton, NY) to announce his candidacy for the 116th Assembly District of New York State.

Flanked by elected officials, taxpayers, and friends, Walczyk talked about his passion for fighting government bureaucracy, red tape and taxes. He also talked about the cycle of brain drain and lack of job opportunities in our communities.

“Northern New York is my home. I plan to one day raise a family here and don’t want to continue to see our educated youth remain our number one export” Walczyk says. “We have so much beauty here but it’s not an affordable place to retire, and lack of job opportunities is splitting up families.”

A major focus of Walczyk’s campaign will be getting the State out of the way of businesses and municipalities who are hamstrung by overtaxation and overregulation.

He used the Regional DRI money contest as an example: “Rather than forcing Potsdam to compete with Watertown, Ogdensburg, and Massena for pots of money from Albany, if we tax businesses less and eliminate unfunded mandates to our municipalities, we’ll empower job growth locally” he continued.

Councilman Walczyk talked about the importance of investment in infrastructure but did not get detailed about policy initiatives.

“It’s critically important to listen first. I really look forward to getting out to each community, hearing from you, and if elected; taking those concerns, suggestions, grievances and issues directly to the Capitol.”

Walczyk continued: “New York City’s heavy thumb has been on the scales of balanced power in Albany for too long. We need representation who will FIGHT for our Northern New York interests, work with like-minded upstate legislators, and turn the tide against taxes and spending in NY’s Capitol.”

“Balancing that power means holding our State Government – and the individuals entrusted to run it – accountable. I will be your watchdog in Albany” Walczyk pledged.

Walczyk, 32, won his seat on Watertown’s Council in 2015 by a nearly 30% margin with 2,567 votes. Until recently, he served as District Director to State Senator Patty Ritchie. He also serves in the US Army Reserve.

He graduated from Central Square High School in 2003 and from the University at Albany in 2007 with a BA in History. Mark is a Christian, an Eagle Scout and a 4-time Ironman Triathlete.