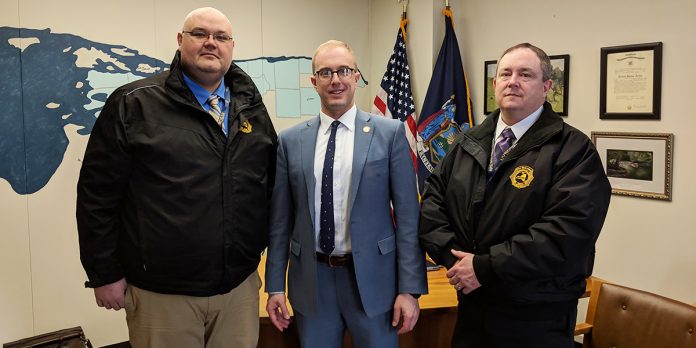 WATERTOWN, NY —  On the heels of a big drug bust at the Riverview Correctional Facility in Ogdensburg, Assemblyman Mark Walczyk (R,C,I,Ref-Watertown) is calling on Governor Cuomo and Legislative leaders to provide funding for the placement of drug sniffing dogs at every correctional facility across the State.

The incident at Riverview Correctional occurred on February 7, when an officer discovered synthetic marijuana, known as K2, and utility blades that were hiding in a package that was being mailed from the Bronx to an inmate in Ogdensburg.  Two weeks ago, four inmates housed in Cape Vincent Correctional Facility overdosed on K2.

“I applaud the instincts of the corrections officer that caught this contraband.  Their actions took dangerous substances and weapons out of a criminal’s hands and help protect the safety of other officers,” said Assemblyman Mark Walczyk.  “It’s high time Albany steps up to the plate to help end this problem.  I’m calling on the Governor to include funding in the state budget to have drug sniffing dogs placed in every facility across New York.  Ask any Correctional Superintendent and they’ll tell you, drug dogs work.”

Assemblyman Walczyk has been vocal in recent weeks about bolstering the safety of state prisons.  He raised concern about language in the Governor’s budget proposal that, if included in the finalized state budget, would give him the power to close an undetermined amount of state prisons.  Additionally, Walczyk announced that he and Senator Patty Ritchie have introduced legislation (A.8703/S.7640) that would require a drug sniffing dog be placed in all Correctional Facilities in the State with over 100 inmates.

“There’s a high cost to the taxpayer when these prisoners get wildly high while behind bars. Add up the cost of overtime after a fight, medical bills, emergency room visits, staff time inspecting mail, the expense of drug testing suspected inmates, and you’ll more than cover the cost of the dog,” Walczyk added.  “We’ll save money and make our prisons safer for the inmates and CO’s.”

Assemblyman Walczyk has toured Corrections Facilities across the Front Yard of America and prison officials agree, that drug sniffing canines are one of the best deterrents of drug smuggling through visitation hand-off. Likewise, these dogs would be able to assist in dormitory shake-downs, and detect any illegal substances concealed in packages and envelopes in the mail room.