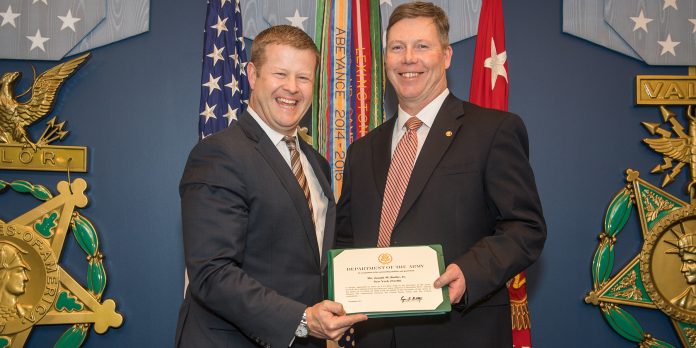 WASHINGTON, DC – The U.S. Army appointed a Watertown resident as a new Civilian Aide to the Secretary of the Army during an investiture ceremony Jan. 14 here in the Pentagon.

“I want to thank Joe for willingness to serve,” McCarthy said. “Our Army is an all-volunteer force. Now, more than ever, we rely on our volunteers, such as CASAs, to help build networks, foster relationships and tell the Army story to your communities. You are the first handshake into the city and the last handshake as I head back to D.C.  The Army is open for business and we’re looking for the best of the best. I am counting on our CASAs to lead the way.”

“It is an honor and privilege to be selected by the secretary for this vital position,” Butler said.  “I look forward to articulating the Army’s mission and building the bond between the Army and our civilian population.  I could not be more excited about working with the men and women in uniform who wake up every day committed to defending our democracy, the American values we hold so dear, and the freedoms we enjoy because of their service and sacrifice.  I hope my unique perspective and experience will be an asset for the secretary when building relationships within our military and civilian leadership.”

Butler is the former Watertown mayor, serving from 2016 through 2019.  Prior to being elected, he served two terms on the Watertown City Council from 2008 through 2015.  He works for Community Bank Wealth Management where he is a registered representative with FINRA. He holds a general securities license and is an accredited investment fiduciary.  He has been with the bank since 1997.

CASAs are a vital part of the Army, promoting good relations between the Army and the public and advising the Secretary about regional issues.

Each state, the District of Columbia and the five U.S. territories have one or more CASAs appointed to provide a vital link between the Army and the communities for which they serve. CASAs are usually business or civic leaders who possess a keen interest in the welfare of the Army and their communities.