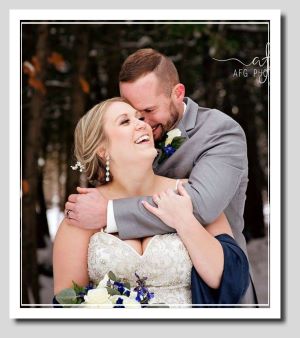 On Saturday, December 16, 2017 Amanda Lynn Snyder and Andrew Roy Eaves were married at the Tug Hill Vineyard with a reception at the Elks Lodge, both in Lowville. Richard Wild Bradstreet from The Church of Jesus Christ of Latter Day Saints officiated the wedding.

Amanda is the daughter of Rhudell and Catherine Burriss of Watson. Andrew is the son of Thomas and Nancy Eaves Jr. of Lowville.

The Bride and Groom were engaged in September 2016 while on vacation in Dallas, TX attending a Dallas Cowboys game.

The new Mr. & Mrs. Eaves reside in Lowville with their three children and Doberman, Maverick.