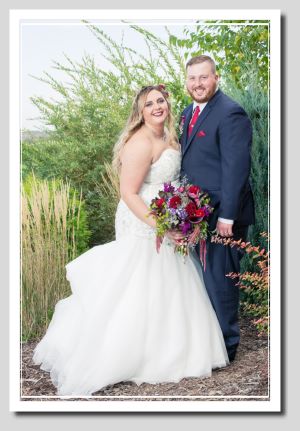 On Saturday, October 7, 2017, Megan Lynn Hyneman, daughter of Tina and Neil Hyneman, Watertown, and Erik Jonathan Edmonds, son of Shayne and Scott Edmonds, Copenhagen, were married in an outdoor ceremony at Ridgeview Inn in Lowville. The groom’s brother-in-law Shawn Keefe officiated the wedding.

The couple exchanged their own hand-written vows in front of their friends and family. The Maid of Honor was Alyssa Alteri, best friend of the bride. The Bridesmaids were Ashley Williams, Maci King, Rachel Blanchard, Emily Blanchard, and Elise Edmonds. The Best Man was Justin Weaver, best friend of the groom. The Groomsmen were Brendan Granato, Carl Tausend, Jordan Sawyer, and Carlos Patino.

Megan and Erik enjoyed a honeymoon in Florida, where the groom proposed in 2015. The newlyweds reside at their home in Dexter.