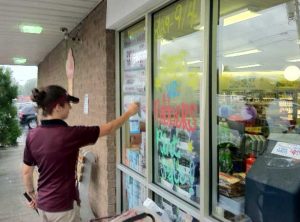 A store employee removes the “Cops vs. Robbers” writing on a window at the Stewart’s Shop, 1226 Washington St., Watertown, on Sunday morning.

WATERTOWN, N.Y.  —  Gunfire erupted late Saturday on the south side of Watertown.

Two city police officers and a Jefferson County sheriff’s deputy shot at a woman who was waving a handgun outside a convenience store after holding two store clerks hostage shortly after 11 p.m., according to Police Chief Joseph J. Goss.

The assailant was taken to Samaritan Medical Center by Guilfoyle Ambulance and is believed deceased, Goss said.

The names of the suspect, store clerks and police officers involved have not been released at this time. A police source and a witness told Newzjunky.com that the suspect was a woman.

A news release from state police indicated the woman killed was 50-years-old from Dexter.

A store clerk at Stewart’s Shop, 1226 Washington St., called Jefferson County 911 and reported a robbery in progress with an armed suspect still in the store across from Case Middle School.

The two city officers and the deputy were in close proximity at the time of the call and immediately responded to the scene. 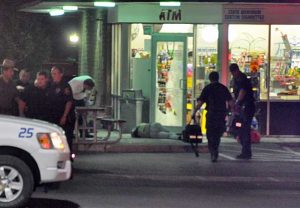 “At one point during this incident tonight, one of the clerks from Stewart’s was coming out the front door at the direction of the robber,” Goss said. “The clerk broke free, the assailant was ordered to drop the weapon and the suspect did not do that.”

“It was pointed in the direction of the police officers and the deputy at which time they returned fire. They fired on the suspect, hitting the suspect. The suspect went down. The clerk is safe,” the chief said. 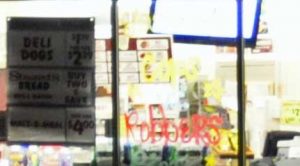 The front glass door of the store was shattered in the incident.

Goss and Jefferson County Sheriff John P. Burns consulted with District Attorney Cindy F. Intschert at the scene and decided to turn the investigation over to the New York State Police Bureau of Criminal Investigation.

“We made the decision that we would call the state police in and use their BCI along with their evidence technicians to assist us in this investigation,” Sheriff Burns said.

“As it appears from everything we’ve gathered, certainly the subject came out of the store in a threatening manner, waved the handgun at the officers who did return fire,” Burns stated.

“There were a number of rounds that were discharged,” the sheriff said. “Pending investigation, we do not know exactly who may have at shot or how many rounds at this time.”

“It certainly appears at this time that both the deputy and city police fired rounds,” Burns said.

Goss expressed relief that the two store clerks, a man and woman, are safe and no law enforcement were injured.

“It’s troubling that this is occurring in our city, but our officers and deputies are well trained and at this time we’re going to see obviously how this shakes out as state police look into this further,” Goss said.

The chief said he does not recall an incident involving a police officer shooting a suspect in the city during his 29-year career on the force.

Burns said the last incident involving his department was the Stuart Moss incident on Sept. 11, 1987, on Pillar Point in which Dexter Police Chief Sam Johnson was killed.

Police shut down Washington Street between Chestnut Street and the entrance to Watertown High School. The city of Watertown Fire Department, Guilfoyle Ambulance and New York State Department of Environmental Conservation assisted police, deputies and troopers at the scene.

The incident remains under investigation by state police. 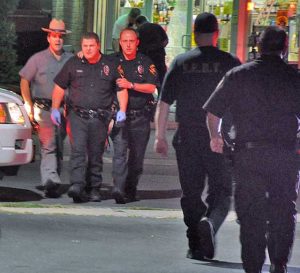 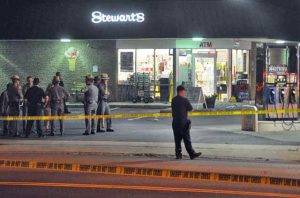 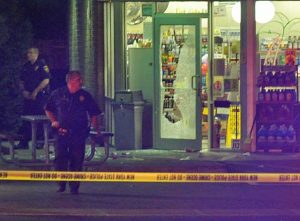 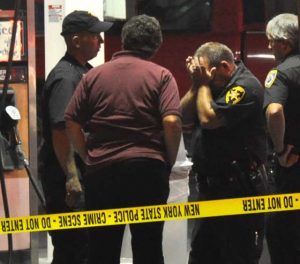 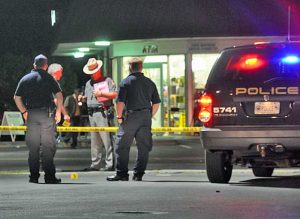 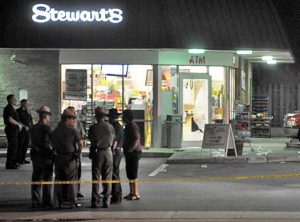 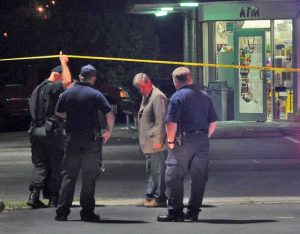 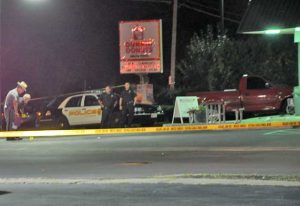 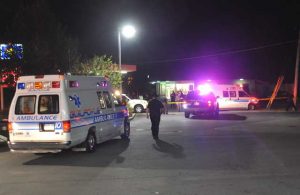 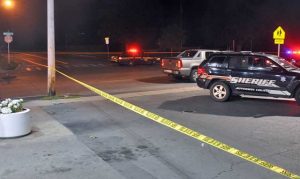 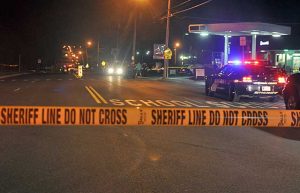