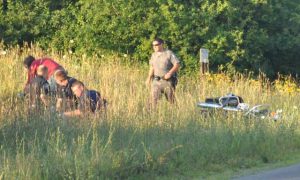 WATERTOWN, N.Y.  —  A town of Watertown man has been arrested after allegedly driving drunk and crashing into a motorcycle, killing the operator, according to state police.

Kristian M. Loftus, 35, of 20740 Hadcock Road, is charged with second-degree vehicular manslaughter, a felony, driving while intoxicated and failure to keep right.

According to court papers, Mr. Loftus was traveling north on Hadcock Road in the town of Watertown at about 7:50 p.m. Friday in a 2006 Dodge pickup truck while allegedly intoxicated when he crossed the center of the roadway and collided with a southbound motorcycle operated by Richard S. “Scotty” Sample, 52, of 21019 Hadcock Road, resulting in Mr. Sample’s death.

The pickup truck was parked in Mr. Loftus’s driveway when police and emergency personnel arrived on scene, an investigator said.

Mr. Sample, a longtime National Grid employee, could not be revived and was pronounced dead at the scene, troopers said.

Mr. Loftus refused to submit to a chemical and blood test to determine his blood alcohol content, troopers said. A warrant to obtain a blood sample had been issued by Jefferson County Court Judge Kim H. Martusewicz, police said.

According to documents, Loftus told troopers he was driving home from a golf course in Lewis County. The accident occurred less than 100 yards south of his driveway. 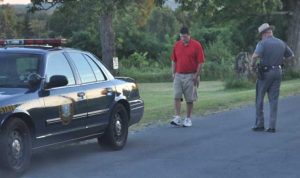 Loftus was arraigned at 2:20 a.m. Saturday before Town of Watertown Justice James P. McClusky who set bail at $2,500 cash. Bail was paid at court by a family member and Loftus was released on his own recognizance at 2:35 a.m. He awaits grand jury action.

Senior Assistant District Attorney Patricia L. Dziuba had requested bail be set at $50,000 cash. Attorney Anthony M. Neddo represented Loftus at the arraignment and had asked that his client be released without bail based on his family’s significant ties to the community.

An investigator stated during the arraignment that Mr. Loftus has no criminal record.

Troopers were assisted at the accident scene by the Jefferson County Sheriff’s Department, Town of Watertown Ambulance, and members of the Town of Watertown, Rutland and Felts Mills fire departments. 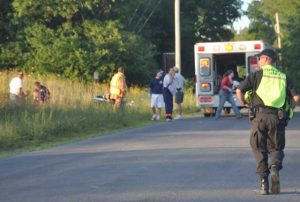